The Data Says “Don’t Hug the Dog!” New data shows that hugging your dog raises its stress and anxiety levels (click to read) 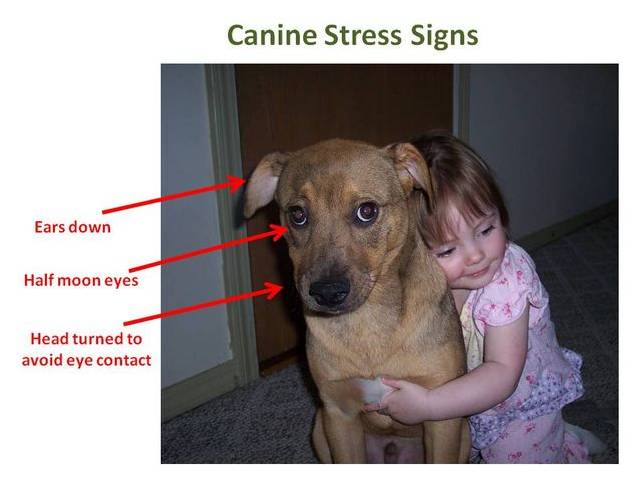 I had brought my dogs to be part of a “Doggy De-Stress Day” on the campus of a local university. These are becoming more common for many colleges in North America and are usually held during midterm exam or final exam periods. The way it works is that dogs, often therapy dogs, but sometimes just well behaved pet dogs, are brought to campus and students get a chance to pet and interact with the dogs. The rationale here is that during exam periods stress levels run high in the student population, however there is ample evidence which shows that dogs can reduce stress levels (click here for more about that). So this seems like a simple method of making students feel a bit less hassled before and between their tests.

At one point during the event a small Asian girl came over to my Nova Scotia Duck Tolling Retriever puppy and gave him a hug. At the time he was just about six months old, and like most puppies he was relatively tolerant of any form of interaction. Nonetheless, in response to the girl’s hug he turned his head to break off eye contact, his ears slicked down, and he gave a small stress yawn. I leaned over and said to her, “You really shouldn’t hug a dog. They don’t like it and it raises their stress level.”

The girl looked at me with an expression of disbelief, “I’m studying developmental psychology and there’s lots of evidence which says that hugging is important and pleasant. When a mother hugs her child the child gets a surge of the hormone oxytocin and so does the mother and that hormone is associated with loving and bonding. There is evidence which says that if parents don’t hug and touch their child a lot, that child can grow up to be emotionally stunted. So how can you tell me that hugging isn’t good for dogs, especially for a puppy?”

The real answer to her question is, of course, that dogs are not human children. Dogs are technically cursorial animals, which is a term that indicates that they are designed for swift running. That implies that in times of stress or threat the first line of defense that a dog uses is not his teeth, but rather his ability to run away. Behaviorists believe that depriving a dog of that course of action by immobilizing him with a hug can increase his stress level and, if the dog’s anxiety becomes significantly intense he may bite. For that reason certain websites which try to educate children and parents in order to reduce the incidence of dog bites (such as Doggone Safe) make a point about teaching children that they should not hug dogs. Furthermore, a few years back when a children’s book entitled “Smooch Your Pooch” recommended that kids hug and kiss their dog anytime and anywhere the American Veterinary Society of Animal Behavior (AVSAB) felt that it was necessary for them to release an official statement which said that they strongly advised parents to avoid purchasing the book since “This information can cause children to be bitten.”

Given how well accepted the idea is that hugging is not something which dogs like, and that hugging a dog may be associated with increasing the likelihood of a dog bite,  I was surprised that a search of the scientific literature produced very little experimental evidence to support that belief. I did find two articles which showed that getting bitten on the face was much more likely if you were hugging or kissing a dog but the authors of both studies seemed to suggest that it was the proximity of the person’s face next to the dog’s mouth which the most important factor, rather than something like the hug itself. For that reason I decided that perhaps I could collect some data on this issue.

The signs of stress and anxiety in dogs are well-established, and are easily observable, at least by trained individuals. Obviously at the high-end of stress we have dogs who bare their teeth, however there are more subtle indicators. The most common sign of anxiety is where the dog turns its head away from whatever is bothering or worrying him and this is sometimes accompanied by closing the eyes, at least partially. Alternatively dogs will often show what is commonly called a “half moon eye” or “whale eye” which is where you can see the white portion of the eyes at the corner or the rim. One common visible sign of stress or anxiety is when the dog’s ears are lowered or slicked against the side of the head. Lip licking or licking a person’s face can also be signs of anxiety as can yawning or raising one paw. These signs and other similar ones should be easy to detect in stressed dogs. All that I needed then to conduct the research was a source of photographic material showing people hugging their dogs.

Fortunately for me the Internet abounds with photographs of people and their pets. If you put the search terms “hug dog” or “love dog” into something like Google Image Search, or Flickr, you will get a virtually infinite scroll of pictures of people and their children hugging their pet dogs. I decided to look at a random sample of 250 such pictures. I used a variety of criteria to try to keep the data as clean and precise as possible. I only used photos where the dog’s face was clearly visible. I also eliminated situations where one might expect the dog’s stress level to rise because of factors other than being hugged (such as when a large dog is being lifted off the ground while being hugged). Each picture received one of three possible scores: (1) it could be judged that the dog was showing one or more signs of stress or anxiety; (2) alternatively it could be judged that the dog appeared to be relaxed and at ease; (3) finally it could be decided that the dog’s response was ambiguous or neutral. Two examples of dogs that were scored as stressed while they were in the process of being hugged are shown below.
Source: Modified from a Humane Society of Greater Rochester photo, Creative Commons License

Source: Modified from a Peter Kemmer photo, Creative Commons License
I can summarize the data quite simply by saying that the results indicated that the Internet contains many pictures of happy people hugging what appear to be unhappy dogs. In total 81.6% of the photographs that were scored show dogs who were giving off at least one sign of discomfort, stress, or anxiety. Only 7.6% of the photographs could be rated as showing dogs that were comfortable with being hugged. The remaining 10.8% of the dogs either were showing neutral or ambiguous responses to this form of physical contact.

I suppose that one aspect of the data which struck me as interesting comes from the fact that the photographs that I used were obviously posted by individuals who wanted to show how much they cared for, and shared a bond with their pet. This means that the people who were doing the Internet posting probably chose those photos in which they felt that both the person and the dog looked happiest. Nonetheless, around 82% of the photographs show unhappy dogs being hugged by their owners or children. This seems consistent with other research which suggests that people, especially children, seem to have difficulty reading signs of stress and anxiety based upon their dogs facial expressions. Much more relevant for the current question, is the fact that these data clearly show that while a few dogs may like being hugged, more than four out of five dogs find this human expression of affection to be unpleasant and/or anxiety arousing.

The clear recommendation to come out of this research is to save your hugs for your two footed family members and lovers. It is clearly better from the dog’s point of view if you express your fondness for your pet with a pat, a kind word, and maybe a treat.